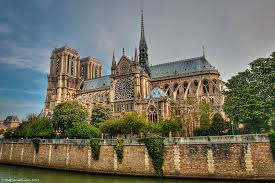 Our journey through Chicago was over; it was time to pack up and leave. We carefully set up the camper, out the slides in, and drove away. We were not going to miss the campground, but we were going to miss Chicago. Our goal for the day was a driving day, but when we got a call from some friends that lived in Indiana that we were close by, we had to visit them. I did not recognize them because it had been at least a decade since we had seen them last, but our parents did. After hours of mountains and small lakes going by and through different fields with hundreds of colors we were finally there. How would we get our 40-foot home through the narrow streets or Notre dame?

When driving through neighborhoods we realized we weren’t in the best area because of how many cop cars PATROLLED, not just drove, across the streets. In one of them we met 2 cop cars on the same little road! We pulled up and called our friends. We were near the college of Notre Dame, home of the Fighting Irish. When we saw a black truck we realized it must be them. We parked our home, they parked there car, and we got out and slowly walked towards each other family as if we were in some sort of a movie. The “kids” (meaning the 4 of us) awkwardly waited, not knowing each other. Last time we had seen each other (which I once again don’t remember) none of the kids were born. I was the oldest of all of them by far, having the youngest being the only girl at 8, her brother, Will at 10, and my little brother at 11. I sort of hung around the adults for most of the time but I got to meet Will and Natilee as well.

We got a chance to look around the college, starting with the most famous part “Touchdown Jesus”. It was and old mosaic but it was kept in such great shape (even being hundreds of square feet) that you would think it was made a few weeks ago. Touchdown Jesus was at the far edge of the courtyard where students could roam whey they pleased. After that we played a short game of football (american) with the ball that we brought. After our team won we went inside for a bit (probably seeing far less that 1% of the college) by walking upstairs to the library. I don’t quite know why we visited the library exactly because it was just a regular library, but it did give us a chance to see the area briefly AROUND the library. It was a VERY expensive looking school (from what I saw) and had huge glass windows everywhere to look over the massive courtyards. I was kind of jealous!

Being a very Catholic-based school, the two main attractions of the campus were Touchdown Jesus, and the on-campus church. That’s what we decided to do next. We stayed for a little bit marveling at the architecture and then left. We decided to go back to the camper and then maybe go out for some dinner with them. When we finally got back to the camper we set it up and invited our friends inside. We went to get some chairs so we could sit outside before it started to storm, we saw the clock. We were 5 hours away from our destination and it was already 7:00! We told them we really needed to go, sadly said goodbye, and left. After a long time of driving through mountains, on cliff sides, and over rivers, we finally got there at midnight. We hurriedly checked in and then parked our camper. We loaded it up, not very rushed anymore, and went to sleep.

IF YOU ARE NEW to my blog, and you would like to learn a little more about my long adventure, come to my ABOUT section by clicking HERE