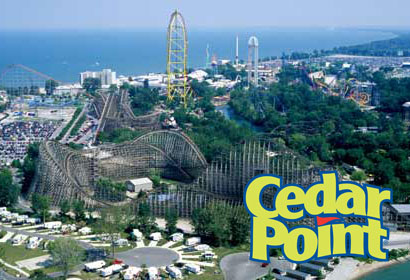 Cedar Point is by far the best amusement park that I’VE personally been too. From the moment that we left the camper at 9:30 or so we were excited- even before we got there. We needed to stop by a store in order to purchase some extremely cheap Cedar Point tickets. The when we got there I wondered if it were French or German. I asked my brother what he thought it was and he said it could be Spanish. I told him it wasn’t Spanish because I KNEW Spanish, and the conversation ended. Aidan was still somewhat confused. When we actually got INTO the store itself we saw the tickets placed in the middle of the entry way where a BLIND MAN might not be able to miss them. We went to check out the deals and saw that we could get unlimited drinks for only $4 extra per person (approximately  £3) That is a little less than a single drink from Cedar Point! After that we took off to go to the one and only Cedar Point. After about 40 minutes of driving we saw it. Cedar point was located very close to the beach and looked quite frankly like it had its very OWN island! When we got to the entrance we paid our short fee to get in and then entered. We had a large Bike Rack in the front and a big stabilizer in back so we asked one of the parking crew members if we could park in the truck section. He said no at first but after a second glance at the back he gave a thumbs up to OK us. We drove between a small car that shouldn’t be there and a large RV and got out. We grabbed our wallets and walked to the entrance. We soon realized that our emergency deference knife was in our backpack still and that we couldn’t bring it into the park so we put it underneath the trashcan before anything else. The truck parking was a lot closer than the regular parking so we walked to the entrance with ease. We skipped the ticket booths and gave the man out tickets to get inside and we took a selfie next to the large plaque of stone that sprung up from the ground with the words Cedar Point on it. The first thing we did was turn left to go to the drink shack and get some refreshing cold Cokes and Pepsi before we did any of the rides. After walking past some rigged carnival games on our right we looked around to find our first ride. We settled with the one called the GateKeeper (170 feet high) and got in line.

After a hot, long and tiring hour-long wait it was finally time to board. I was kind of nervous from the people’s faces getting off but I was willing to do it. One man got off at the last moment, leaving his wife stuck inside. I didn’t fully want to do it so I started getting nervous and wished that the large seatbelt-ish latches would let me out after they were set. All the sudden it started slowly creaking foreword, the chain clanging against the blue metal below us. The layout of the vehicle was of two riders on the left and two riders on the right of the middle. There were a couple of rows of this design. After taking an extended 180 degree turn to the right it plunged upward at a 30 degree angle and stayed that way, moving forward for another hour (12 seconds to be exact) until reaching the highest part of the jaw-dropping 170 foot roller-coaster. Once at the top it slowed slightly and then immediately sped up as it plunged almost strait down. What it actually did is curved backwards (kind of like Lagoon’s Cannibal, for a reference) which would have made it worse if It were meant to be a scary ride. It was odd because you would expect it to be terrible- not really. It was actually very relaxing. Even as it dropped and twisted and shook at its high speeds it wasn’t anything more than excitement! Once it slowed down and parked in the station I got out glad that I did it. Once we were off we went to another extreme ride that held close to 70 people as it launched into the air while spinning. This one wasn’t scary either! In the line could have been better than the actual ride not because it was BAD but because it was hilarious looking at some of the participants faces.

After a couple more rides we wandered by the gift shop area where we looked around for something to possibly buy. We saw some very interesting designs on the shirts and hats but got nothing. We stumbled on a glass shop that was created out of bottles cemented together and were amazed by what we saw. There was a demonstration out back that was fascinating. They told us the basics about the art and showed us some examples. Don’t know what glass art is? I’ve provided a link: Click HERE if you would like to see it. Once they were finished we moved on to go visit the best part of the park: the middle. After a short while of walking we saw some people with VR headsets on as they rode! We had to check it out. What we did first was the Neck Breake- I mean the CorkScrew… But it would break your neck. It spiraled and quickly recovered and slammed your head into the sides of the seat. Not quite fun- just annoying- this was the only ride I wouldn’t recommend. We next saw the VR ride and the reviews were good but sadly after that terrible Br- I mean CorkScrew I was too shaken up to do it. My little brother, Aidan, tried to be 13 but he got the wrong date- July of 2005 so he couldn’t use the VRs. I guess that’s kind of how the world works though. Anyway, night was setting and we were almost done for the night… but not yet! Our dad decided to get on the fastest/worst ride in the park. Luckily for him (and us) the ride shut down so he couldn’t ride it. He got off and we started to walk back but remembered… Cedar Point always holds a party on their private beach! If you are interested in reading my second post, click HERE to see the Night-time party portion.